Will the Steaming Compost Heap of B2B Nurture the Cloud?

Last winter for the first-time in my life I created a compost heap. My first attempt wasn’t as large as this steaming beauty down under… 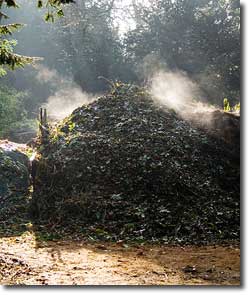 … but indeed the fires of bacteria were raging such that the first time I thrust my hand deep into the core it nearly burned. (Yeah, my wife thought that was a dumb thing to do too – but you know, I simply didn’t count on my first bacteria party being such a big hit!)

So last week I spent some time on the phone with folks at Google (I know, harsh transition – indulge me) getting an update on the Google App Engine (GAE) and in particular adoption patterns for its new Secure Data Connector (SDC), which I recently referenced on a blog post regarding Cloud and EDI – The Ultimate Mashup. Precious few public details so far from Google on enterprise adoption of GAE and SDC, but they claim there’s viable quiet early adopters and I’m willing to give the folks at Google the benefit of doubt and a bit more time to make good on future public examples.

Also seeking to more easily link Cloud-based services to on-premise enterprise Apps, Amazon recently announced the Amazon Virtual Private Cloud to help drive adoption of Amazon Elastic Compute Cloud (EC2). It has partnered with Cast Iron to provide for Cloud-enabling integration as a service (IaaS) capabilities to help accelerate adoption of Amazon EC2. Here again adoption of IaaS to solve Cloud computing / SaaS integration problems is still light, but given the potential for Amazon to get real traction on EC2 I’m willing to give this new market time to mature.

So back to our steaming compost heap … of traditional B2B.  EDI tenaciously persists; as well do the providers of supply chain-enabling IaaS that carry huge chunks of EDI-based B2B traffic such as GXS, EasyLink, Inovis, and Sterling Commerce. While Cloud computing providers steal IT headlines and forge relationships with Boomi, Cast Iron, Informatica, Pervasive and other emerging purveyors of Cloud-enabling IaaS, the large providers of supply chain-enabling IaaS are quietly modernizing their networks and laying business intelligence across billions of transactions. (Follow the money)

Cloud-enabling IaaS. Supply chain-enabling IaaS. A delicate new sprout. The compost heap that nurtures its growth. Cloud. EDI. The point I made in my Cloud and EDI – The Ultimate Mashup post was that the Cloud and EDI world will soon be IT’s biggest Mashup ever. Expect some cross-pollination. But who ultimately will be the IaaS winners? Native members of the new Cloud eco-system? Incumbent carriers of most supply chain traffic today? Or yet others, jostling now to govern Cloud interactions? In the end, will the steaming compost heap of B2B nurture the Cloud?

Benoit Lheureux is a research VP in Gartner Research and agenda manager for the Application Infrastructure group. He focuses on three areas: application integration, middleware and B2B e-commerce, with the emphasis on the latter. Read Full Bio

Thoughts on Will the Steaming Compost Heap of B2B Nurture the Cloud?