We just published our  Hype Cycle for Blockchain and Web3, 2022   Crypto and token prices crashed in 1H22, but coin prices should not be conflated with technology value. Consumer apps like NFT games and commerce are driving innovation as enterprises gradually begin to realize business value. A tipping point in adoption will soon be reached, as risks are managed proactively. 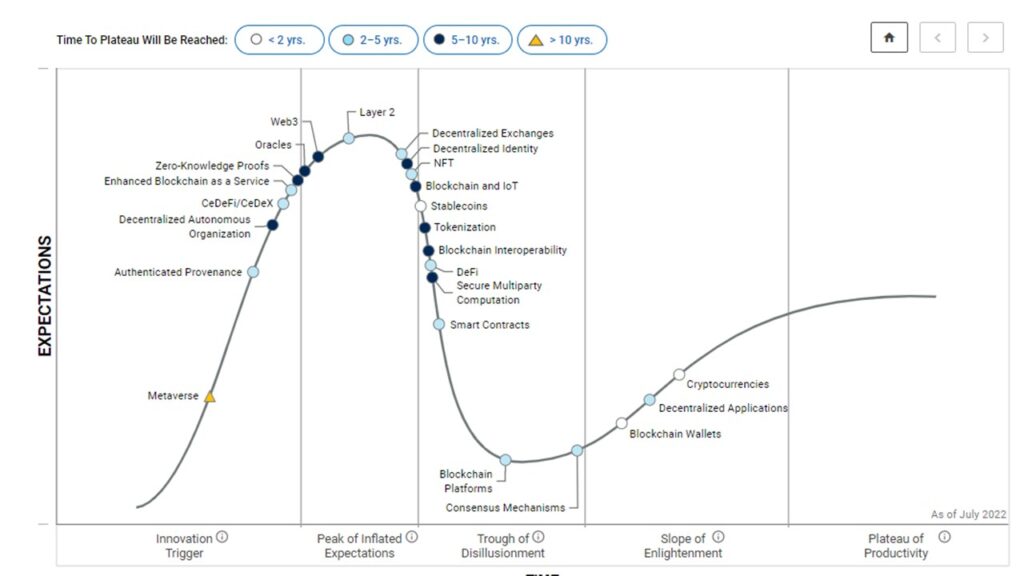 Corruption got the Upper Hand

The recent cryptocurrency crashes were in large part caused by corrupt players who lied to customers or lenders about what they were doing with their money.   In contrast, DeFi protocols did not crash – the smart contracts closed automatically when the collateral was insufficient or when other terms were met.

You could reasonably argue that the market crashes caused by corrupt players would have been avoided had everyone been using decentralized finance where no single party had control.

It’s easy to throw the baby out with the bath water so it’s important for market observers to untangle the facts and recognize the value of blockchain innovations – as described in our Hype Cycle – that have not heretofore existed.

Smart contracts and tokens are just computer code and are independent of the greed and corruption of the ‘centralized’ bad actors that took advantage of them.

In fact, bad guys experiment with new technologies much faster and earlier than the good guys do.  That’s a historical fact. It takes time for the ‘good use cases’ to catch up and it takes even more time for fraud and security controls to be deployed.

No Killer Use Cases

In the meantime, other than cryptocurrency trading, we still have not seen killer use cases yet. They need to leapfrog over current applications in terms of making our lives better. For example, wouldn’t it be helpful if you had a car accident, that you received your insurance payment for the damage within ten minutes?  That could conceivably happen with the combination of Web3 and other technologies, like AI and IoT. It’s just a matter of time before it does.

We are witnessing gradual improvements using blockchain technologies. Enterprise applications ranging from aircraft maintenance to food safety use tokenized real-world assets and smart contracts to manage them, and reap benefits that are starting to materialize. Hybrid identity systems that use blockchain will soon allow football fans in Spain to enjoy special perks at their games. See Wise Security in Spain  Teachers will soon be able to innovate by owning and marketing their online content, without being bound to a specific platform or service provider.  See  Animoca Brands invests in Tiny Tap

Still, risks are high, thorny problems remain and “killer apps” that drive mainstream adoption have not yet arrived.  And most U.S. regulators do not seem to be moving any faster to protect and regulate the parts of the market that should and can be regulated.

Note: Gartner added “Web3” to the title of this year’s Hype Cycle because Web3 represents the larger ecosystem of innovations underpinned by blockchain.