The latest disclosure of one billion Yahoo! user records is SHOCKING and begs the question:

Where has all this stolen data gone?  If so many identities have been compromised, why haven’t we all lost ‘our shirts’ by now?

More American identities have been compromised than haven’t according to U.S. state tax agencies I’ve spoken with. Some mega bankers go beyond this estimate and tell me that virtually EVERY U.S. identity has been compromised. At first glance, it doesn’t seem that all these stolen identities are being used in illegitimate ways by our adversaries– or are they?

Actually I think every single identity record that’s been stolen is being used by one or more adversaries.

Here’s how I see the threat actor groups – which together often form loose alliances to benefit each other’s work. 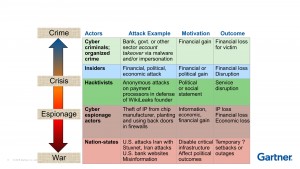 Note: If you are a global bank or government agency that disburses monetary benefits, all of these bad actors are attacking your organization. If your organization is in a different sector, at least some of them are.

Stolen data is sliced, sold and resold to all of these actors (except for the hactivists which mainly focus on service disruption and typically not asset theft). This data is used by cybercriminals for financial gain (which consumers directly notice because they see money leave their bank accounts), but more ominously by nation states (e.g. Russia and China) who manipulate our political and economic processes, and/or steal intellectual property and anything else they can get their ‘cyber hands’ on.

People Databases and their Use

I first learned about these ‘people databases’ back in 2004. A federal law enforcement officer told me criminals were assembling stolen data into portfolios of full identity information, containing as much data on an individual as they could gather, e.g. email addresses, user ids, passwords, bank accounts, credit cards, social security numbers, drivers licenses, passports, retirement accounts, etc.  He told me that this information would be used one day by nation state adversaries with potentially disastrous consequences.  I remember wrestling with what he told me that day, and trying to figure out how indeed all that data would be used to wreak havoc on the United States.

Fast forward twelve years and I think it’s pretty clear that we are in the middle of a serious and escalating national cyberwar that we are largely unprepared for.  It’s easy to blame individual companies like Yahoo! for lax security but frankly the range and magnitude of today’s cyberthreats is too large for any one company to solve on their own, even if they can afford the cyber-fight and the help of able partners and technology suppliers.

Beyond stealing data, nation-state adversaries and cyber-spies are reportedly planting employees at security and other infrastructure companies so that these employees can write backdoors into these firm’s hardware or software, a tactic widely used by U.S. intelligence agencies in the past though they didn’t have to plant employees to accomplish this goal.

Adversaries have managed to penetrate national grids (see Ted Koppel’s Lights Out), intelligence agencies (ala NSA), nuclear reactors (ala Iran in this case by ‘friendly nations’), and other entities that have spared no expense for cybersecurity. How can we — and should we — expect other less-equipped organizations to fend off these threats all on their own? And does it make sense for individual companies and organizations to keep relying solely on individual efforts when the cyber-threat crisis is of national proportions?

We have military branches in the sea, on the ground, and in the air – but not at the right proportion in cyberspace – where the entire national population deserves more protection. But the prospect of having one doesn’t look very good – and that’s an understatement.

What can we do in the meantime? Basically ‘change our passwords’, cross our fingers, close our eyes and hope for the best…. Never a strategy I like to take.