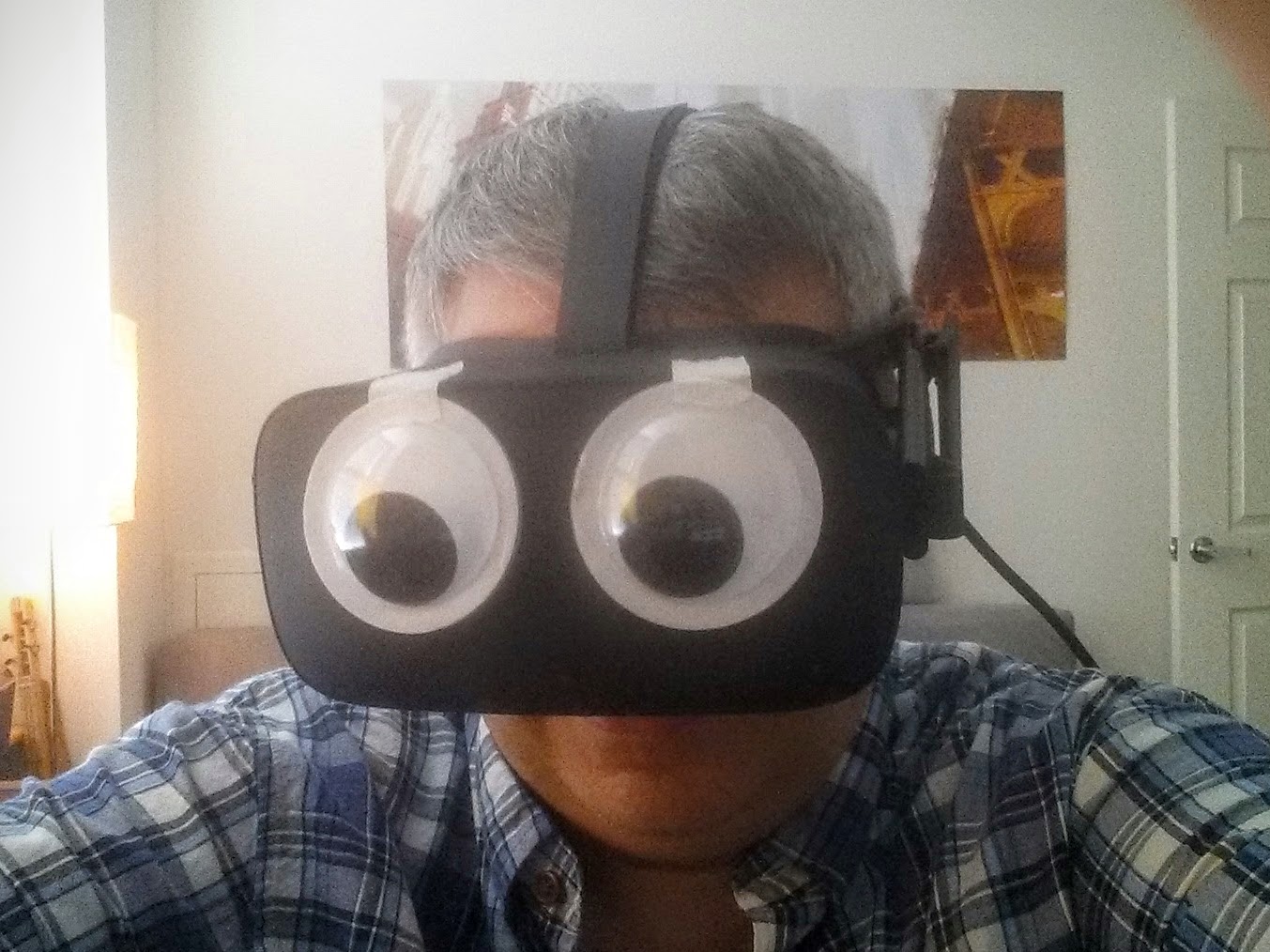 Me in my Oculus Rift: “Yes, honey, I am totally paying attention to you and not playing a game right now.”

As a frequent early adopter of technology, I have sometimes experienced a unique and contradictory set of feelings when using groundbreaking tech: I can be simultaneously dazzled and also modestly disappointed. The former sentiment comes from the unmistakable leap forward the tech represents and the latter from the apparent limitations of version 1.0 (along with the knowledge my expensive new hardware will quickly be surpassed).

These conflicting emotions describe how I feel using my new Oculus Rift virtual reality (VR) headset, a product recently launched by Facebook. It’s an impressive piece of tech that clearly demonstrates the promise of the future, but the drawbacks of this first version are also easy to recognize. Both the strengths and the challenges of today’s VR devices will impact consumer adoption, as well as the opportunities for marketers.

My feelings about my new Oculus Rift are identical to the ones I had with my Atari 1040ST in 1986 and Palm Treo 600 in 2003. The Atari was one of the first home PCs with a graphic user interface and its 320×200 color monitor displayed images that seemed wondrous at the time, but I couldn’t help but be frustrated at its slow speed and the need to continually swap floppy disks when using software. Almost two decades later, my Treo encouraged the same feelings–the ability to respond to email, take (terrible) photos and access the Web were awesome, but the kludgy interface, size of the device and pokey responsiveness were constant reminders of the hardware and software improvements to come. Using the Oculus Rift provides me those same synchronous feelings of wonder and mild exasperation, and that fills me with high hopes for the future of VR.

By mentioning some of the limitations of today’s VR hardware, I don’t intend to discourage others from considering a purchase, but anyone who invests in the initial iteration of leading-edge tech must expect some bumps in the road. Consumers and marketers interested in VR should be aware of the strengths and challenges of today’s tech and what is likely to occur in the future. I will first share some of my feelings as an Oculus Rift user and then convey some observations about what this all means for marketers.

Positive impressions of the Oculus Rift

Here are the aspects of the Oculus Rift that have been most positive in my experience:

Future opportunities for the Oculus Rift

Here are areas of improvement that I expect in future versions of the Oculus Rift hardware and software:

What today’s VR strengths and challenges mean to marketers

Adding it all together–the expense, the terrific new capabilities, and the limitations–it is evident that marketers must proceed with care as they consider adding VR to their brand’s marketing mix. Although it is understandable that marketers get excited for the opportunity to envelope prospects and customers with 360-degrees of video and audio, any branded VR apps will enter an increasingly crowded marketplace competing for attention from a small (but growing) set of consumers with capable devices.

At the recent Gartner Marketing Conference, I presented the current state of virtual reality and forecast VR’s future for marketing leaders. I foresee the same four phases of rise and fall that we have seen in the past with other tech advances:

Gartner subscribers can access our report on Virtual Reality for Marketers. It describes an approach and series of questions marketers should ask to determine if VR is right for their brands and how to get the maximum benefit. It guides marketers to begin with a focus on goals and audience and ends with consideration for the usability and promotion of branded VR offerings.

Virtual and augmented reality will grow in the years to come, but neither consumers nor marketers should expect VR hardware and software to deliver quickly on the tech’s full promise. In short, no one should expect The Matrix or Minority Report any time soon.