Machine intelligence is intelligent in its own way.

With machine intelligence, machines substitute pattern construction for learning, pattern recognition for understanding, and probability analysis for judgment in decision making. These are the core capabilities behind the machine learning subset of AI.

The machine intelligence combination of pattern construction, pattern recognition and probability-based decision-making is indeed very powerful. This combination enables data engineers, data scientists and computer programmers to build algorithms that can see. They can create, read, write, listen, respond, decide and act. Machines do these “intelligent” activities differently from humans and with some superhuman capabilities.

You can sum up what machine intelligence does very well with the three Ps of patterns, probabilities and performance. 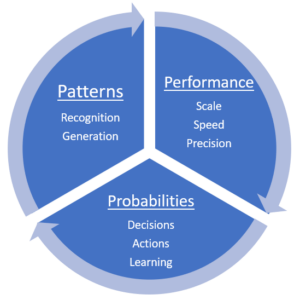 Machines are far better than humans at identifying patterns in enormous amounts of data.

A big strength of machine learning is finding patterns in large amounts of data. The “big data” concept began gaining general acceptance about a decade ago. But we are now past “big data” into unimaginably enormous data. And the rate of data accumulation is growing exponentially with the combination of social media, the internet of things (IoT) and cloud computing. This ever expanding volume of data makes algorithms indispensable. We now have far more data than humans can absorb with even the best dashboards. There is little value in these enormous data sets without algorithms to help make sense of them.

Finding patterns in large amounts of data is the basis for machine learning. The “learning” aspect is the creation of algorithms that identify select patterns in the data. So, computers don’t learn the way humans do. Instead, they learn the way machines do, through pattern-based algorithm training. For example, using a large number of images of dogs, a computer algorithm can randomly assign and reassign variable values to pixel patterns until the algorithm establishes a formula that represents key pixel pattern characteristics of dog images. This is pattern construction through deep learning neural network technology.

Algorithms are highly effective at recognizing objects within images and they get better every day. The same goes for identifying patterns in video, sound, light, text, and, of course, structured data. Earlier, I specifically used the phrase “simulates human identification” vs. simulates human understanding. Because although the algorithm may recognize pixel patterns associated with the label “dog,” it doesn’t understand dogs. It doesn’t know that dogs are man’s best friend, that they like to fetch things, that you can train them with treats, etc. It simply recognizes pixel patterns with a strong match to those of dog images. Pattern recognition is the number one value proposition AI delivers to business.

For example, the US Postal service has now deployed an edge AI system using computer vision and analytics to process over 20 terabytes of mail image data per day. Using this image data, AI accomplishes tedious work at great scale. In addition to package tracking, it identifies, deciphers and repairs damaged barcodes. It also checks to see if postage is correct. And the USPS is just beginning to tap into the power of their growing image AI capabilities.  This type of AI application is growing steadily in the supply chain function and industry.

Machine intelligence doesn’t stop at pattern construction and pattern recognition. With machine intelligence advancements like generative adversarial networks (GANs) the pattern recognition algorithms can be “run backwards” to generate rather than identify content. This is the technology behind “deep fakes.” Machine intelligence can create. This is ground breaking. Over time, as these technologies evolve further, machines will be capable of generating text, images, video and sound content that is indistinguishable from the real thing. Yes, this certainly has numerous scary implications but the positive applications are astounding. Machines can very rapidly generate alternative designs that meet stipulated criteria.

For example, IBM has spearheaded new AI technology that can generate designs for new antibiotics and antivirals. Essentially, researchers apply AI to large data sets to determine patterns of peptide molecule binding relationships. AI identifies how molecules assemble to perform certain functions. Researchers then determine the characteristics they are looking for in an antibiotic. They input these characteristics into the algorithm and it generates alternative molecule designs that meet the criteria. Researchers then test these designs to find the most effective antibiotic.

Does it matter that the algorithm doesn’t “understand” the patterns it recognizes or generates? Theoretically, maybe. But practically, machine intelligence can accomplish a large variety of highly valuable work finding, identifying and using patterns.

Probability math is the foundation of machine learning. With probability based algorithms, machine intelligence can run through huge amounts of data, assess a multitude of potential options and then consistently select those with the highest probability of meeting the desired goal. This MI capability far exceeds those of even the world’s smartest mathematicians. The capability delivers a powerful tool in making well understood business decisions at great scale.

Some financial institutions are using AI to comb through enormous amounts of customer data to identify good candidates for a new product or service.

It is well known that facebook and Google apply AI against unimaginably large amounts of member activity data to make automated decisions on what content to serve them next. They also apply the same approach to decide what advertisements to feed members while trying to serve both user and advertiser needs.

This is algorithm driven probability based decision making that happens everyday across every industry and every geography.

The performance of computing machines is well understood. Computers operate at astounding speeds and scale. They can consistently execute tasks with great precision at tremendous scale. Computers don’t get tired, frustrated, angry or rebellious. They do what they are asked with great efficiency. Scale, speed, endurance, consistency and precision have long been core value propositions of computing machines. We have long capitalized on this performance to execute procedural tasks. But now we have graduated from these more transactional tasks to more “cognitive” like tasks. And all the core computing benefits translate well to machine intelligence and its capability to detect issues, predict outcomes and facilitate decisions.

This characteristic of machine intelligence can’t be overstated. Why? Because it takes “intelligence” far beyond the human performance spectrum. When you hear about how AI will replace human jobs, it is almost always one-sided and limited to the human scale world. This may make sense for job losses but not for gains. Machine intelligence takes us far beyond the physical human world and opens up the hyper-human realm for new opportunities. This hyper-human realm operates at spatial, time and spectrum scales that are far too small or far too large for unaided human abilities. For example, the combination of microbiome ML, smart-microscopy and bio micro-robotics is turning human biome engineering (managing the bacteria in our gut) into an industry of its own.

At the other end of the scale spectrum, AI was required to combine data from eight observatories across six geographies to help develop the first ever actual picture of a black hole. I will post more in the future on hyper-human hyper-specialization and the explosion of AI generated jobs.

The 4 Maladies of Artificial Intelligence Hype