A month or so ago, I led a discussion with a group of about a dozen technology executives. They are board members for different organizations. The discussion topic centered around how they should advise their company boards on artificial intelligence adoption strategy.

So, what is the difference between artificial intelligence and machine intelligence? In the vast majority of literature, they are pretty much used interchangeably. I believe the casual reader would consider them synonyms. However, I also believe the two terms are fundamentally different and each embodies a different mindset. And I see this difference reflected in adoption practices.

So let’s get right to what I think is the fundamental difference. 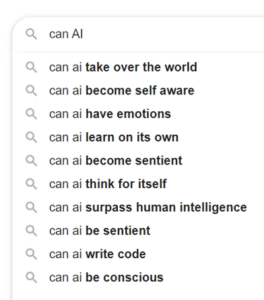 The hype is sometimes subtle making it even more misleading. An ieee article I read recently stated, “Everyone agrees that current AI techniques such as deep learning still fall short of enabling a general AI that has intelligence comparable to animals or humans.” The terminology “still falls short” implies that it is somewhat close. This is like saying that Southwest Airlines still falls short of interstellar travel. And yet, these kinds of comparisons are commonplace. At least ieee.com gives a shout out to artificial goat intelligence.

I have seen many artificial intelligence models that directly measure machine intelligence against the strengths of human intelligence. Invariably, this is a one-sided view where machines, not surprisingly, come up short. Apparently, it is a really big deal for computers to achieve “common sense.” Contemplate that as a bar of achievement. How much of human greatness can we chalk up to common sense?

Machine Intelligence Centers on the Capabilities of Machines

Alternatively, the machine intelligence term embodies a more pure view of what machines can achieve without the bias of a comparison to humans (or dogs, cows and goats for that matter). This is important. It promotes a focus on the strengths of machine intelligence and not its comparative weaknesses.

For example, computer vision algorithms are now scanning x-rays to detect numerous pathologies. Algorithm accuracy is reaching parity with radiologist accuracy for a number of pathologies. Except the algorithm is much faster and can work 24-7 processing thousands of x-rays in a day. If you were to place those workloads on a human radiologist then we would see a tremendous accuracy advantage for the machine.

Better is a relative term. The term artificial intelligence might be better for data scientists in a lab. Some are using human intelligence as a bar to which they strive.

Analysis and experiments on when and how machines will achieve artificial general intelligence may help them invent and tune algorithms. However, business leaders should not get sidetracked by artificial “human“ intelligence.

In my opinion, it is far more productive to combine the two. The bottom line is that business leaders should focus on the strengths of machine intelligence and figure out how to combine those strengths with the capabilities of their people to build a better organization.

The 4 Maladies of Artificial Intelligence Hype