Recently I have participated in a few long Gartner research threaded discussions on “explainable AI,” AI ethics and how to manage bias in particular. I’ve also recently attended a few discussions with machine learning luminaries such as Harry Shum, former EVP of AI and Research at Microsoft. In those discussions there was a lot of talk about bias in algorithms and how to recognize it and manage it. However, my position is that if you are primarily looking for bias in the algorithm you are looking in the wrong place. From these interactions, among other things, I believe there are 4 stages relevant to AI bias; real world bias, data bias, algorithm bias and business bias. 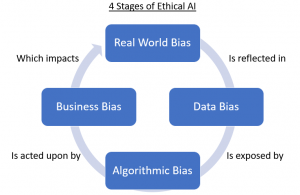 The “real world” bias involves actual bias in the real world. Or more accurately, what are the biases that people and systems impose on the relevant portion of the real world. So if we are examining home lending practices or real estate sales practices or K-12 teaching systems, this layer is about the inherent biases within those people, practices, systems, etc.

And finally business bias represents how businesses act upon the data/AI for business benefit. Businesses discriminate all the time. It is critical to success. Ethical businesses will strive to discriminate ethically. They will discriminate based on relevant criteria that determines a good prospective customer, storefront geography, job candidate, product investment, etc. They will avoid discriminating based on gender, race, sexual preference or other unethical or immaterial criteria.

So what does all this mean? It means that:

At this point it should be pretty obvious that “business bias” or how a business chooses to act upon the AI results is the more appropriate place to look (and act) when it comes to ethical AI. AI machine learning algorithms provide an unprecedented capability to expose unethical bias. Organizations should actively look for the often hidden unethical biases in the data (that accurately reflects the real world) to make ethical business decisions. This goes beyond “explainable AI” and is the true core of ethical AI.

Harry Shum told a story about when they were building computer vision algorithms against ImageNet. They had hundreds of hidden layers in their deep neural network (DNN) with tens of nodes in each hidden layer. This means there were tens of thousands or more weights that were set dynamically. Explainable AI is near impossible with these extensive DNNs. He showed how, with these types of DNNs, instead of trying to achieve explainability they set out to find the unethical bias in the data. They listed out possible unethical biases in the data (i.e., descrimination based on gender, race, etc.) and actively used AI to find and map them using techniques like proximity and parallelism. This goes beyond explainable AI and gets closer to transparent AI which exposes all relevant bias in the data.

As has been true for eaons, business bais remains the key to ethical behavior (AI is just the current flavor). Businesses should actively use AI to discover both ethical and unethical bias and act responsibly upon those findings.

Some relevant Gartner content includes (available only to Gartner clients):

AI Ethics: Use 5 Common Guidelines as Your Starting Point

Predicts 2020: AI and the Future of Work

Digital Ethics by Design: A Framework for Better Digital Business