As an avid PC gamer I happen to have a love for military strategy and war games.  Just to expose my nerdy credentials, I once played a “play-by-email” game with my father (he in the UK, me in the US).  We simulated War in the Pacific over a 3 and a half year cycle.  Every week we would take turns to move our pieces, plan our strategy, and send the resulting file by email.  He won.  Nuff said.

Well, the user interface (UI) is critically important to PC games – probably games on all platforms.  The quality of the UI can mean the success or the failure of a product in the market.  In enterprise application software its impact is less simple than that – but it can have a significant impact.  So here is a story of an innovation that has just emerged that I believe will change the PC gaming market.  Enterprise software developers can leverage this story, I feel.

For the last 20+ years the way you moved units (troops, armies, navies) on a board (the map on your PC screen) has not changed.  You would use your mouse to select a unit and then click a location.  The unit would then move to that location.  Code would be used to determine the path chosen and you, the player, had no or little direct control over the route chosen.  In early games, and even poorly designed games today, units would take silly paths and often get stuck somewhere – turning up later to the fight you had planned for them.  You might even lose the war because of this.  The challenge was somewhat resolved with “way-points”.  This would allow you to manually select specific points along the way.  In a tedious manner you would again select the unit and then click multiple times at specific locations on the map where the unit was to move.  A move could include any number of individual way-points, and tedious clicks all over the map.  Again, between the way-points  the unit was still controlled by code that would select the most appropriate way to get to each.  So the problem was never really resolved.

This legacy approach, in use by almost all military and real time strategy games, is about to be blown away.  Enter Ultimate General: Gettysburg by Game-Labs LLC.  In the graphic below you can see how I give each unit movement instructions.  I select the unit and then I draw the specific path I want them to take – from start to end.  I can go direct, or I can move around the map in “S’s” and in fact any shape I want to.  It is intuitive, it is self-evident.  At a stroke I get a pleasing UI and an effective UI. 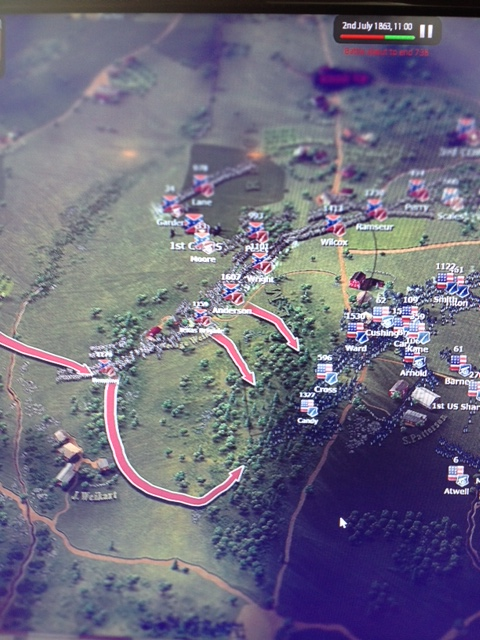 If you wanted to select multiple units before giving them a move instruction you had to use the control key, or the shift key, or some combination, and use your mouse to select the units themselves.  This was also tedious.  With Ultimate General: Gettysburg you simply click and draw around the units you want to order together, as if you were a general leaning over the map, and drawing sweeping hand gestures.  See the graphic below: 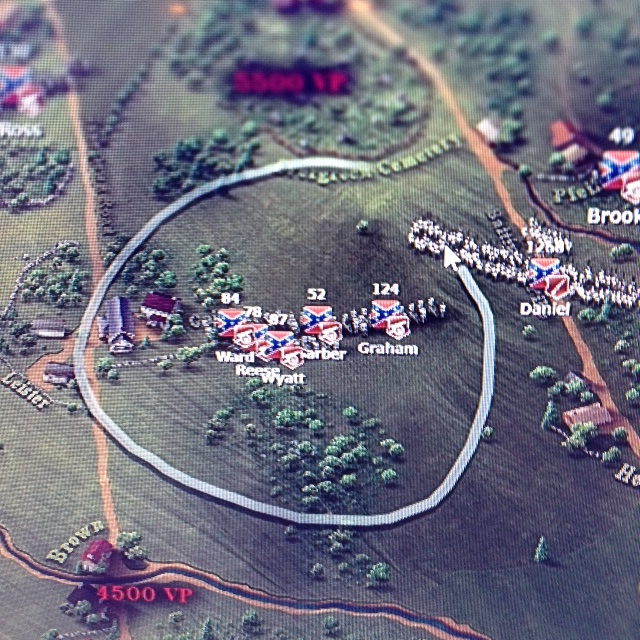 Once drawn I issue orders once and all units in the sweep receive the same order.  Again, this is simple, intuitive, and pleasing.

In both cases above, movement and grouping, the legacy software designers used the available tools to hand (mouse, and screen) and created a standard that has worked well enough for a long, long time.  This new game will force other developers to respond since it behaves like I think and would do if I was that general.

I have written about the importance of the UI before (see Why Mobile Gaming is Killing our High Tech Industry – though Doom and id Software may yet help.)  The UI of your “A” screens (if you know what that means) should exploit high-taction, as this game does, to engage the user.  Software developers should adopt techniques that work or extend what it is end-users want to do every day.

I think its fun to watch how software vendors address their perceived end-user needs while not actually being users themselves or even asking them.  Too many start their standard software demo with their “C” screens where all the capability is presented.  Smart vendors  start their demo with their “A” screens, showing the results and benefits of the work that should be implied by the use of their technology.  If only we all could be generals for a day…

China Does More for Your Data Strategy than US or Europe