With the mainstream news volume turned up to eleven, you might have missed the publication of Gartner’s third annual Magic Quadrant for Ad Tech (subscription required). In describing the ad tech market context, naturally we note how the deprecation of tracking technologies such as cookies and mobile ad IDs have dealt a mortal blow to ad tech’s legacy core foundation of audience targeting. This has led to spiking interest in alternative identity solutions with no clear resolution in sight.

Even if you’re tuned into the identity wars, it was still easy to miss another recent, relatively obscure announcement that US wireless providers went live with ZenKey, a network-based identity solution for mobile apps that aims to improve security for sites and convenience for users by reducing the need for extra passwords and one-time passcodes. Regardless of its focus on security, “identity solution” is a trigger-phrase for privacy partisans. For ad tech fans, it stirs hope for an alternative to the future where all the data needed to target and measure ads at scale is banned or under walled garden control. On the advocacy side, it stirs suspicions that unaccountable corporate interests will find a way to subvert progress toward restoring individuals’ control over their personal data.

ZenKey, which focuses on user authentication and has no apparent interest in ad tech, sidesteps controversy:

Still this begs the question, where are the carriers on privacy? As network operators, they’re in a unique position to combat privacy-protection work-arounds like fingerprinting and spyware with advanced proxy services. Or, they could override device- and browser-based privacy protection themselves based on their necessary ability to uniquely identify each device on their networks and its owner (burner phones notwithstanding). Their regulated visibility into all the traffic on their networks is the only source of behavioral and interest data that could rival the big walled gardens.

Their reluctance to wade into this mess is understandable. Previous ISP attempts to monetize data for advertising have not gone well, and, given the sensitivities here, detached neutrality makes sense. Still, their participation in the search for a solution would be welcome.

The collective private-sector working groups addressing the future of privacy in digital advertising have mostly coalesced into two camps. In August, the ANA announced the Partnership for Responsible Addressable Media, which included the IAB Tech Lab, whose Project Rearc has been leading the technical side of the charge to develop standards they hope will eventually form the basis for privacy-preserving solutions free from reliance on cookies or mobile ad IDs. The Partnership consists of trade groups, large advertisers like P&G, Unilever, Ford, and GM, ad tech companies and ad agencies. NBCUniversal represents the publishing sector and—through its Comcast parent—is the closest thing to telco participation. Tellingly absent are Google and Apple, whose browser policies are most consequential, and Facebook and Amazon, who, along with Google, dominate the digital ad market.

Meanwhile, at the World Wide Web Consortium (W3C), the Improving Web Advertising Business Group is actively focused on Google Chrome’s Privacy Sandbox where bird-themed technical proposals are taking flight. The latest, Dovekey, is a modification of SPARROW, a proposal developed by Criteo in response to Google’s TURTLEDOVE proposal. These proposals focus primarily on the mechanics of an ad auction that would replace the current cookie-dependent Real-Time Bidding (RTB) system. They suggest a future where interest group membership (established by browsers using a protocol such as Federated Learning of Cohorts (FLoC)) is associated with contextual ad requests supplied by publishers based on the nature of the ad’s surrounding content. One source of contention is whether intelligence should reside in the browser or the cloud and, if the latter, how can the servers be trusted (without forcing everyone in the ecosystem to adopt a complex cryptographic solution)?

This would seem like a good entry point for the big carriers/ISPs to join the discussion. After all:

AT&T and Verizon, of course, each have their own ad tech companies which participate in these initiatives (again, see Magic Quadrant for Ad Tech). But they’re aligned with their respective media businesses and operate at a considerable distance from telecom. (Not to mention reports of distress and for-sale signs.)

Could the telco operators make a surprise pivot into consumer-friendly data players with intelligent proxies and virtual agents that represent our interests in data negotiations and liberate us from the curse of endless consent flow barricades? Could they even deliver their own bird proposal? Maybe they could call it PELICAN – for Proxy-Enabled Limited Information Consumer Agent Network.  And maybe they could deliver real identity innovation as part of our basic connectivity services. Yes, the prospect seems remote at the moment. Then again, many unpredictable things have been happening lately. 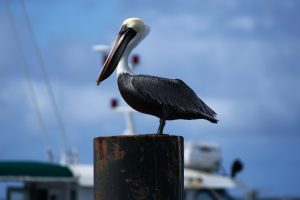 Marketers at the Edge of Doom

Marketing and HR Should Talk About the Future

The Gartner Top Marketing Predictions for 2022 and Beyond

Explore the future of marketing based on a present filled...

Take better advantage of the marketing data you have, improve...