One hundred years ago, the United States was besieged with social problems. Political corruption, public violence, and rampant addiction weighed upon the populace. Many saw a solution in the growing movement to ban alcohol consumption. So, in 1919, Congress passed the Eighteenth Amendment and ushered in the era of Prohibition which lasted nearly 14 years. January 17, 2020 will mark the 100th anniversary of the day the country went dry. 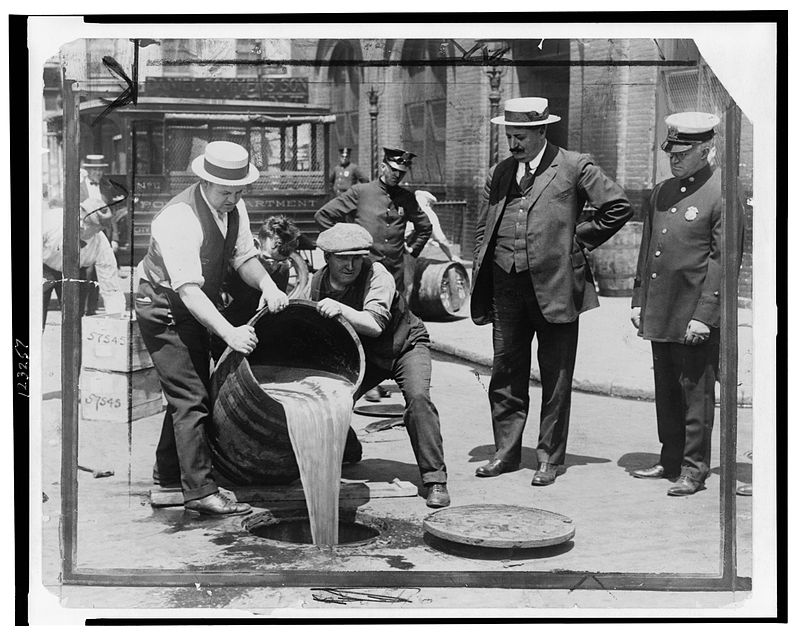 Prohibition in the U.S. is usually framed as a tale of good intentions gone awry. Instead of reducing crime it created a notorious black market run by violent criminals like Al Capone. Instead of reducing political corruption, corruption flourished as law enforcement embraced bribery and tax revenues waned, paving the way for the great depression. And, while its overall effects on alcohol consumption are still debated, it hardly eliminated drinking.

You may have noticed that these same problems are still with us today. Many now point at the internet and social media as a source of social ills and suggest regulators turn their attention there. Spurred by Europe’s aggressive new privacy laws and the infamous Cambridge Analytica scandal – and a dearth of issues that can win bipartisan support – considerable legislative activity has focused on privacy bills at the state and federal level (Gartner coverage: subscription required). A good deal of that is directed at the hobgoblin of Internet tracking, the browser cookie.

Apple has sought to link its brand with privacy and embraced the cause with ITP.  Google has responded to pressure with its own browser restrictions and cookie recommendations, while Facebook has sought to enhance its privacy controls. Still, I wonder, could cookie bans be the Prohibition movement of the twenty-first century? Let’s consider the parallels.

First, I’ll concede there are some major problems with this metaphor. Prohibition aimed to enforce morality on a personal level by eliminating options for individuals – specifically the urban working-class saloon-goer (who was often an immigrant). Cookie bans, in contrast, aim to restore power to individuals over their personal data by eliminating what it sees as surreptitious surveillance conducted by a shadowy network of corporate data brokers. But if these data brokers are its targets, its unintended victims are publishers, whose already-diminished revenue streams may diminish even more when they can no longer monetize their data for targeted advertising, and advertisers, whose promotions will lose effectiveness due to poor targeting and measurement. No one expects gangland violence to emerge as a result, but there are other consequences to consider.

It’s also worth pointing out that Prohibition was a uniquely American phenomenon, while the privacy movement and its focus on web tracking is global.

Let’s look at some similarities. Most obvious is the irony of fortifying the forces these movements sought to oppose by eliminating their legal competition. Crime was a principle target of Prohibition, yet organized crime flourished with the removal of legitimate producers and distributors of alcohol. In the case of cookie bans, it’s the giant Internet platforms that appear to be ironic winners as the only entities left capable of collecting data and user consent on a massive scale. The elimination of competition from neutral data brokers may well solidify the data oligopoly of the giant platforms. I hear you say, “yes, but aren’t the FTC and FCC and EU also targeting them with antitrust investigations?” True, but how much could this affect their dominance over consumer data collection? Facebook feeds, Gmail accounts, and Amazon transactions will still accumulate billions of digital footprints even if severed from their parallel interests in Instagram, YouTube and Whole Foods. It would take some aggressive restructuring to unwind these massive data collection operations.

A related similarity is the overall regressive effects of both movements – that is, their disproportionate impact on people and businesses at the lower end of the economic scale. Prohibition mainly affected the working-class poor: wealthy individuals could and did legally stockpile alcohol for private use. Meanwhile, small urban business owners who lacked the means to participate in high-cost protection rackets were victimized by Prohibition’s crime wave.

Cookie curbs are driving publishers toward subscription models to replace ad revenue, reducing media access for individuals who can’t afford hefty monthly subscription fees. As the economic incentive to offer ad-supported content free to consumers evaporates, political incentives move in to fill the void. On the business level, only the largest publishers can count on enough subscription revenue to compensate for a shrinking ad market, and only the most beloved of brands will gain enough consensual data to maintain effective direct marketing programs at scale. Of course, many expect to just game the system. The rest remain at the mercy of the data-rich Internet giants.

To further stretch the Prohibition metaphor, perhaps we can cast the IAB Tech Lab in the role of the Untouchables. (Yes, I know, Eliot Ness and his gang didn’t start until the 1930s but bear with me.) The Tech Lab is developing solutions to the challenges of balancing privacy with the needs of advertisers and publishers. None is more significant than its Transparency and Consent Framework (TCF), a proposal to bring the advertising ecosystem in line with compliance obligations under GDPR and the ePrivacy Directive. After encountering some resistance to its initial version, the Tech Lab recently released TCF v2.0 following a 12-month review period that included Data Protection Authorities from around the EU. This is a key effort to rescue the world’s open ad markets while preserving consumer control.

Perhaps most significant is TCF v2.0’s new format for more clearly describing data processing activities and obtaining granular consent from end users, which aims to relieve some of the frustration and confusion associated with the burden of managing privacy options on every web site, another unintended consequence of new cookie rules.

TCF v2.0 will go fully live at the end of Q1 2020. If enough publishers and advertisers get behind it, perhaps it will blunt some of the more negative effects of cookie curbs, and the privacy movement’s more positive effects will wind up benefitting the public, the media, and advertisers. For this to happen though, marketers need to stay engaged. Watch for upcoming Gartner reports on the topic, which is a key theme for our advertising research for the remainder of the year.