Gartner’s 2017 Hype Cycle for Marketing and Advertising is out (subscription required) and, predictably, AI for Marketing has appeared as a new dot making a rapid ascent toward the Peak of Inflated Expectations. I say “rapid” but some may be surprised to see us projecting that it will take more than 10 years for AI in Marketing to reach the Plateau of Productivity. Indeed, the timeframe drew some skepticism and we deliberated on this extensively, as have many organizations and communities. 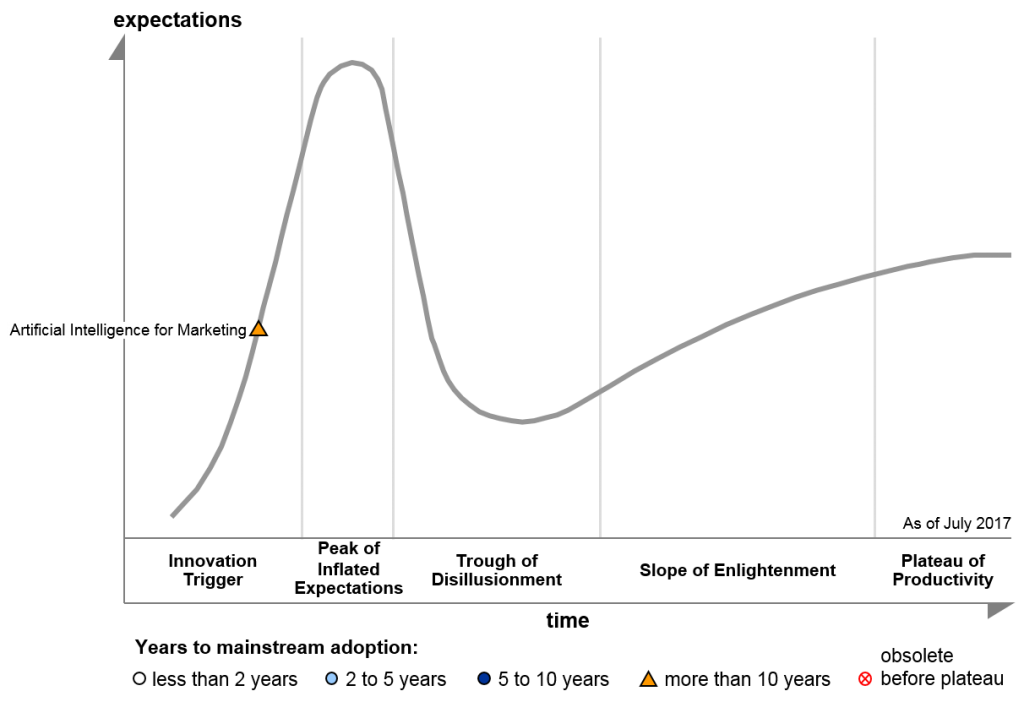 First, let’s be clear about one thing: a long journey to the plateau is not a recommendation to ignore a transformational technology. However, it does raise questions of just what to expect in the nearer term.

Skeptics of a longer timeframe rightly point out the velocity with which digital leaders from Google to Amazon to Baidu and Alibaba are embracing these technologies today, and the impact they’re likely to have on marketing and advertising once they’ve cracked the code on predicting buying behavior and customer satisfaction and acting accordingly.

There’s no point in debating the seriousness of the leading digital companies when it comes to AI. The impact that AI will have on marketing is perhaps more debatable – some breakthrough benefits are already being realized, but – to use some AI jargon here – many problems at the heart of marketing exhibit high enough dimensionality to suggest they’re AI-complete. In other words, human behavior is influenced by a large number of variables which makes it hard to predict unless you’re human. On the other hand, we’ve seen dramatic lifts in conversion rates from AI-enhanced campaigns and the global scale of markets means that even modest improvements in matching people with products could have major effects. Net-net, we do believe AI that will have a transformational on marketing and that some of these transformational effects will be felt in fewer than ten years – in fact, they’re being felt already.

Still, in the words of Paul Saffo, “Never mistake a clear view for a short distance.” The magnitude of a technology’s impact is, if anything, a sign it will take longer than expected to reach some sort of equilibrium. Just look at the Internet. I still vividly recall the collective expectation that many of us held in 1999 that business productivity was just around the corner. The ensuing descent into the Trough of Disillusionment didn’t diminish the Internet’s ultimate impact – it just delayed it. But the delay was significant enough to give a few companies that kept the faith, like Google and Amazon, an insurmountable advantage when Internet at last plateaued, about 10 years later.

Proponents of faster impact point out that AI has already been through a Trough of Disillusionment maybe ten times as long as the Internet – the “AI Winter” that you can trace to the 1980s. By this reckoning, productivity is long overdue. This may be true for a number of domains – such as natural language processing and image recognition – but it’s hardly the case for the kinds of applications we’re considering in AI for Marketing. Before we could start on those we needed massive data collection on the input side, a cloud-based big data machine learning infrastructure, and real-time operations on the output side to accelerate the learning process to the point where we could start to frame the optimization problem in AI. Some of the algorithms may be quite old, but their real-time marketing context is certainly new.

More importantly, consider the implications of replacing the way marketing works today with true lights-out AI-driven operations. Even when machines do outperform human counterparts in making the kinds of judgments marketers pride themselves on, the organizational and cultural resistance they will face from the enterprise is profound….with important exceptions: disruptive start-ups and the digital giants who are developing these technologies and currently dominate digital media.

And enterprises aren’t the only source of resistance. The data being collected in what’s being billed as “people-based marketing” – the kind that AI will need to predict and influence behavior – is the subject of privacy concerns that stem from the “people’s” notable lack of an AI ally in the data collection business. See more comments here.

Then consider this: In 2016, P&G spent over $4B media. Despite their acknowledgment of the growing importance of the Internet to their marketing (20 years in), they still spend orders of magnitude more on TV (see Ad Age, ubscription required). As we know, Marc Pritchard, P&G’s global head of brands, doesn’t care much for the Internet’s way of doing business and has demanded fundamental changes in what he calls its “corrupt and non-transparent media supply chain.”

Well, if Marc and his colleagues don’t like the Internet’s media supply chain, wait until they get a load of the emerging AI marketing supply chain. Here’s a market where the same small group of gatekeepers own the technology, the data, the media, the infrastructure – even some key physical distribution channels – and their business models are generally based on extracting payment from suppliers, not consumers who enjoy their services for “free.” The business impulses of these companies are clear: just ask Alexa. What they haven’t perfected yet is that shopping concierge that gets you exactly what you want, but they’re working on it. If their AI can solve that, then two of P&G’s most valuable assets – its legacy media-based brand power and its retail distribution network – will be neutralized. Does this mean the end of consumer brands? Not necessarily, but our future AI proxies may help us cultivate different ideas about brand loyalty.

This brings us to the final argument against putting AI for Marketing too far out on the hype cycle: it will encourage complacency in companies that need to act. By the time established brands recognize what’s happened, it will be too late.

Business leaders have told me they use Gartner’s Hype Cycles in two ways. One is to help build urgency behind initiatives that are forecast to have a large, near-term impact, especially ones tarnished by disillusionment. The second is to subdue people who insist on drawing attention to seductive technologies on the distant horizon. Neither use is appropriate for AI for Marketing. In this case, the long horizon is neither a cause for contentment nor is a reason to go shopping.

First, brands need a plan. And the plan has to anticipate major disruptions, not just in marketing, but in the entire consumer-driven, AI-mediated supply chain in which brands – or their AI agents – will find themselves negotiating with a lot of very smart algorithms. I feel confident in predicting that this will take a long time. But that doesn’t mean it’s time to ignore AI. On the contrary, it’s time to put learning about and experiencing AI at the top of the strategic priority list, and to consider what role your organization will play when these technologies are woven into our markets and brand experiences.