In the annals of data visualization, Harry Beck holds a special place as the innovator credited with coming up with the first modern transit map, the iconic London Underground Tube Map, in 1931. Beck’s breakthrough was to realize that transit riders were much more concerned with usability than geographical accuracy, so he adopted the diagrammatic principles of an electrical schematic to clearly show the relationships among tracks, stations, and connections and abandoned any fixation on topographical precision. In geographically accurate maps, stations in dense areas appeared clumped together while sparse areas contained no useful information. Beck’s version simplified navigation by only including the information that was important.

Now think about the landscape of digital marketing providers. What’s the first thing that comes to mind? It’s probably a confusing image that attempts to map a dizzying array of logos with complex relationships and plenty of jargon. How do you navigate with such a map?

A transit map inspires us because it makes complexity accessible and invites us to explore. It speaks to our desire to get from point A to point B as efficiently as possible, but also to our curiosity about what lies beyond point C, in less familiar outskirts. Mostly, though, it’s about lines and connections. The structure is apparent.

Today, Gartner is releasing its first public version of its interactive Digital Marketing Transit Map (#dmtransitmap). A more detailed version is available to Gartner for Marketing Leaders clients, in toolkit form. I’ll be running through this Thursday, June 20, at 9am ET and 12pm ET in a free webinar – hope you can join. 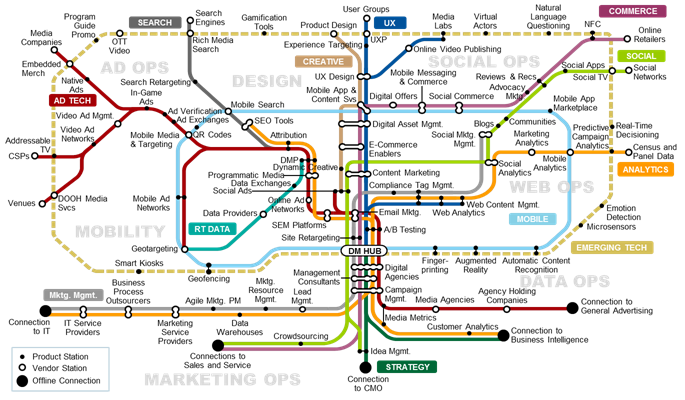