Hyperscalers push the limits of networking products. In doing so, they’ve had to forge new ways of thinking/doing and thus have driven TON of market innovation in networking. One lesser-known example is their use of Functional Accelerator Cards (FACs).

FACs are a class of network interface (i.e., NIC) hardware that help improve and accelerate server availability, bandwidth performance and data transport efficiency in a network (in addition to general connectivity). FACs come with an in-built processor, onboard memory and peripheral interfaces, and are deployed either as an ASIC, an FPGA or an SoC. Also, they are programmable in most cases. So FACs essentially incorporate functions on the NIC that would’ve been done on dedicated appliances (middleboxes) or switches. While all FACs are essentially NICs, not all NICs/SmartNICs are FACs. 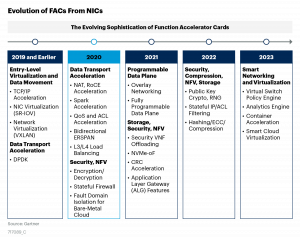 Hyperscalers and other CSPs are adopting FACs to improve server bandwidth availability and data transport efficiency. AWS Nitro is a prominent example. At this point, there is extremely limited enterprise adoption (so middlebox appliances are safe…for now at least). However, forward-lean operators of XXL environments often look to emulate hyperscaler practices (we call this webscale). Vendors including Broadcom, Ethernity Networks, Mellanox (NVIDIA) Technologies, Pensando Systems (and others) are now producing and marketing FACs. Thus, we predict that by 2023, one in three network interface cards shipped will be a FAC. For more information refer to this research (paywall): Market Trends: Function Accelerator Cards Disrupting Traditional Ethernet Adapter Market or the 2020 Networking Hype Cycle.