There’s some cool stuff happening in networking and we just published the 2020 Hype Cycle for Enterprise Networking (paywall). While 5G and SD-WAN remain highly hyped, the COVID-19 pandemic instantly shifted I&O networking leaders’ priorities, creating the need to dynamically, rapidly and temporarily scale to support a large remote workforce. This accelerated interest in cloud-based and consumption-based networking and security technologies including SASE and ZTNA. 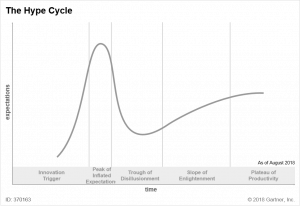 The hype cycle describes the 30 most hyped technologies/innovations in networking. At peak hype (aka “it solves world hunger”) this year is SASE, while Intent-based Networking has reached the trough of disillusionment (aka “it causes world hunger”). IPv6 probably sets the record for the longest time on the hype cycle (I believe 20+ years).

For each technology on the hype cycle, we define it, identify the value to enterprises, the current level of adoption and finally, the anticipated rate of growth. Six technologies new to this Hype Cycle include telemetry-based routing, Wi-Fi 7, SD-branch, function accelerator cards (FACs), ZTNA and standard private LTE. This is the second year in a row in which the networking Hype Cycle has changed by approximately 40% (due to adds/removals/modifications), after a decade of mostly incremental change.  Here’s the full list in Alpha order: