The 2019 Networking Hype Cycle has just published, which covers the most hyped networking technologies in the market today. The premise of the hype cycle is that most technological innovations progress through a pattern of overenthusiasm (it solves world hunger!), then disillusionment (wait, no, it CAUSES world hunger!), followed by eventual productivity, although some technologies go obsolete along the way. The hype cycle defines/describes each individual technology, identifies the value to the enterprise, and predicts how long before there will be mainstream adoption. 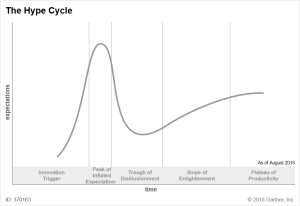 In the 2019 Enterprise Networking Hype cycle, we cover everything from embryonic technologies like NDN all the way to well-adopted architectures like Hybrid WAN (and everything in between; full list below). They hype cycle is increasingly important today because for years, networking technologies experienced primarily incremental improvements centered on speed and features. However, the pace of change an innovation is faster today, particularly around improving day 2 operations, via automation, analytics and better visibility. Thus, networkers today can no longer solely rely on incremental network updates and technology refresh cycles to keep pace as enterprises digitally transform. Instead, I&O leaders must adopt new network technologies and network processes, and evolve their culture to support their business in the digital era. So the hype cycle helps to help separate the signal from the noise, and identify the key technologies which your company should be early (or late) to invest in.

This year, several technologies are at/near the peak of expectations including 5G, Multicloud networking, and uCPE. Meanwhile NFV is clearly in the trough (as many carriers say it is still Not Functionally Valid) while SDWAN and microsegmentation are climbing the slope of enlightenment. For retrospective context, 6 years ago SDN was at the peak while 4G was peaking a decade ago.  Side note:  time flies.  I completely agree with Bill Gates on this particular thought: We always overestimate the change that will occur in the next two years and underestimate the change that will occur in the next ten. Don’t let yourself be lulled into inaction.

Here is the link to to the full research (paywall):  Hype Cycle for Enterprise Networking, 2019, and here’s the list (alpha order) of the 30+ technologies profiled in it: