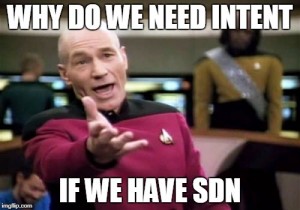 Q – Isn’t Intent this just a fancy term for advanced automation?
No, although the early usage and value will seem similar. Advanced automation solutions typically do not a) translate what to how, b) mathematically validate that desired intent is being met and c) continuously ingest a broad set of real-time network state indicators. A good intent-based networking system will embed advanced automation, but you can (and many do) advanced automation without Intent.

Most likely, no. It will simplify things that humans do including validation. It will automate configurations tasks and dynamically remediate. But you need humans to input data into the system. It will certainly shift resources away from mundane networking tasks. There will be less reactive trouble tickets but more proactive notifications to be tended to. Also, with the impending explosion of IOT devices, we will need a better way to manage environments, because current manual and non-automated practices likely won’t scale. Intent certainly helps here.

Q – Who’s doing intent in the real-world and when will it be mainstream?
We’re tracking very few production enterprise users, less than a few dozen. We predict it won’t be mainstream before 2020.

Q – With all this talk about “automagic” networking, it just sounds like pie in the sky?
I can relate to this sentiment as a long-time network practitioner with a very pessimistic and pragmatic side (combined with too much vendorspeak and vendormath thru the years). Then again, SDWAN also sounded too good to be true in the early days, and that is a very real technology today.

If you think about changing the way you operate your entire network to Intent-based overnight or even within the next year, it feels like a “boil-the-ocean” exercise. Instead, think of Intent coming in pockets or use cases. So maybe next year, it is the new data center pod, and then after that, it becomes the new way to manage WAN devices, and so on. So in 5 years, maybe 60% of your network is intent-driven. That said, while there is great promise for intent, indeed there is no guarantee it will take hold. Below is a contrarian view of adoption, from our published research:

A contrarian view is that intent-based networking will never reach a meaningful level of mainstream adoption, largely based on:
• The technology may prove to be technologically infeasible in the mainstream — that is, the products simply may not work.
• A 15-plus year history of predominantly incremental changes within enterprise networks doesn’t bode well for major paradigm shifts.
• Network automation alone may provide “just enough” network agility/availability advancements to circumvent the need and/or reduce the value of IBNS within the enterprise.

Q – Is this just a shiny new object or fad? How real will it be?

As the father of a 7th grader, I’m aware of fads (bottle flipping, fidget spinning, musical.ly, and famous youtubers). However, the ultimate “staying power” of intent will be directly related to the pragmatic value that can be achieved. So far, it is very early days and it is way too early to call, but is very promising.

Q – Which vendors are leading? Will there be a Magic Quadrant?
Way too early to identify any official “leaders”. That said, there are several vendors doing cool things in/around Intent including Apstra for data center networking use-cases. I anticipate SDWAN vendors will start adding this capability to their products. Also, the incumbents are now starting to make more noise, including Juniper and Cisco. Keep an eye out for Forward Networks, Veriflow, and Intentionet also. No current plans for a Magic Quadrant.