We ran an SDN session at last week’s Gartner IOM conference in Orlando, and asked the audience “Where are you with respect to SDN?“.  I combined the results with similar previous sessions and the results are below (n=113). 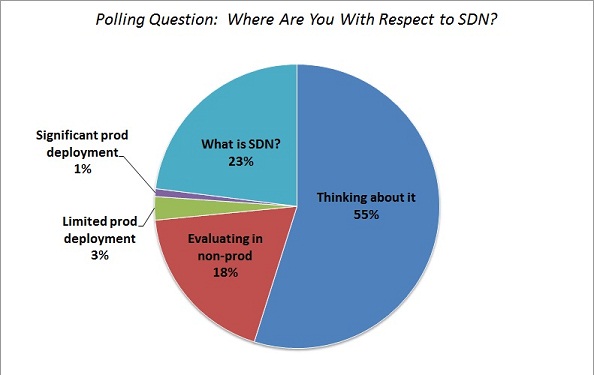 Not surprisingly, there is still mostly just tire-kicking of SDN in the mainstream, with very limited adoption outside of hyperscale and service provider organizations. Based on the past several months of interactions with Gartner clients, here are several observations.

Over the next year we should see a lot more lab testing, pilots and some limited production deployments in the mainstream, as the thinkers move to tinkerers, who are being nudged along due to a) availability of product and b) increased marketing from the likes of VMware and Cisco. And we have some statistics on that as well…

For those organizations moving towards SDN, we have a good amount of published research in the SDN space. If you’re wondering What is SDN?  check out:

If you’re one of those merely Thinking about SDN, check out:

And if you’re currently Evaluating in Non-Production, check out:

Lastly, if you have deployed in production, we want to know!