Every country, state, city, vendor or consulting firm tend to have their own definition of what constitutes digital government. In many cases this is very similar to what we used to call “e-government” almost two decades ago. Also, most of the recipes to become digital resembles those that were imparted to become “e-something”. A few things might have changed – e.g. mobile apps have replaced web sites and portals – but most of the ethos has remained the same: citizen-centricity, life events, digital by default, are all repetitions (or reincarnations) of the same concepts.

Even more, the common wisdom now – pretty much like 20 years ago – still asks for digital to be driven from the top, for digital strategies to be ambitious, to accomplish “fully digital” by 202X (you can choose your X depending on jurisdiction). Let’s be clear, there is nothing wrong with this and it is indeed quite important to push digital transformation high in almost any government organization’s priority list.

However, recent history should have taught us something. If we still have the same objectives as 20 years ago, it is quite likely that we did not accomplish as much as we were hoping for with our “e-government” programs. Sure, technology progress since has been astounding, but would it be enough to help us succeed where we did not in the past?

As I was trying to find a metaphor to explain what we should do different this time, it dawned me by watching my son playing guitar. He the guy at the center of this picture. 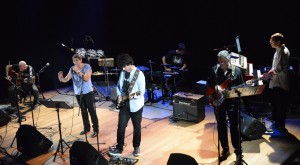 He is a brilliant student at med school and has a great passion for electric guitar and in particular to cover the British band Pink Floyd and its lead guitar’s distinctive solos. Besides learning David Gilmour’s technique, he has been working with guitar effects to reproduce his sound. For those of you who are not into rock music, the sound produced by an electric guitar goes first into a device (or a set thereof) – usually operated with your foot – that process it by adding echoes, delays, distortion and so forth, to then go into an amplifier, which can add further processing (such as reverb).

He started with a fully digital all-in-one device, which is able to emulate a lot of different analog effects as well as amplifiers.

After a while though he noticed that he was not getting the type of sound he was looking for. Here’s a sample of one of his original songs using this device.

His approach was quite surprising. Rather than going for an even more sophisticated all-in-one device, he went back to what original guitar players used to do. He bought different devices – some analog, some digital – for different effects: one for distortion, one for compression, one for overdrive, and so forth. His view was that rather than having one device that solves all problems – including those he’ll never have – it was far better to identify the best possible point solutions to the sound problems he actually had.

This is how his pedalboard looks right now 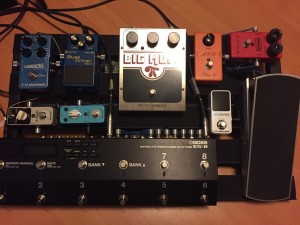 Each box on the top and the right of the board is a different effect. However unlike with the all-in-one device where he could just select a specific configuration of virtual devices (for guitar players, a “patch”) by simply pressing a button with his  foot, creating a configuration on the new pedalboard would require pressing a lot of buttons to switch effects on and off.

This is where the device on the bottom left comes into play. It is nothing else than a digital switchboad. All devices are connected to it and my son can preprogram a sequence of configurations and switch from one to the other by just pressing one button, pretty much like with the old device.

And this is how the same simple riff sounds like now. A much rounder, deeper, richer sound indeed.

So, what does this have to do with digital government anyway?

Well, this metaphor highlights five key decisions that are fundamental to digital government transformation success as much as they were for my son’s sound transformation:

Of course you can well conclude that this metaphor makes little sense and that top-down transformation is the way to go. This is indeed very possible in the few places where administrations do not change or change very slowly or very little. Also, you can always compromise and – to stay with the musical analogy – accept music sampled and mashed-up through a computer (which is the way much pop music is produced today) as opposed to music performed live on stage by real artists.

If you pursue the five principles above though, you’ll be ultimately able to get to something like this: 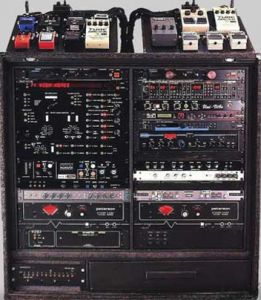 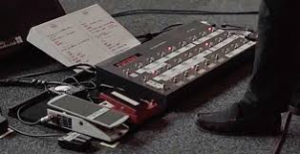 which I am told is David Gilmour’s own stage setting (a huge device box on the left and his actual pedalboard on the right).

For Gartner clients who are interested to get a deeper understanding of the roadmap to follow these principles, we have developed a digital government maturity model (login required)