I have just finished my first keynote adventure at the Gartner Symposium in Orlando and I am partly relieved (you always feel a bit of tension) but I know that I am going to miss the thrill of working with several great people… a least until the European Symposium in two weeks time. 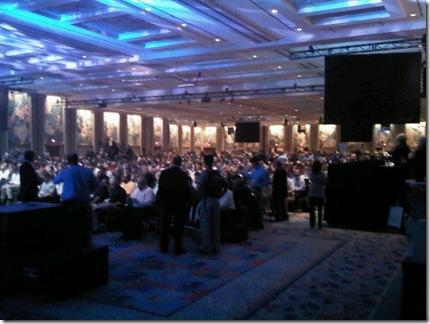 Above: People entering the auditorium, seen from backstage

It was quite exciting to wait in backstage, chatting with co-speakers who were dealing in their own ways with the inevitable emotion of speaking in front of 7000 people. Joking, humming, singing, stretching, sipping coffee, watching each other getting the make up (does it feel weird…). The first good news of the day was that the music cheering the audience as it enters the room has changed and, boy, how good it was. Rather than the usual fusion or film score style, we could hear The Killers, Bon Jovi, the Black Eye Peas, Madonna. That cheered us up a lot and help blend into the rhythm of keynote. 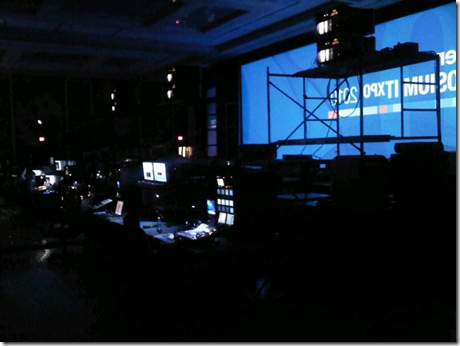 As usual, when you are part of something, you don’t really listen, but it seems to me that the flow starting from recognizing new realities, both for IT and the business, applying new rules and seizing new opportunities was a very good storyline, hitting on some of the top priority issues for IT and business executives around the world.

I like that we used many little stories, all real, and potential scenarios of how the world looks like.

I had the pleasure of introducing the new realities section with a government 2.0 story, which came from a conversation I had earlier this year with the Department of Children and Families of a US state.

The story featured a fictional character, a social worker named Roberto, showing up at the door of one of his case subjects, a fosterchild named Amy, as a consequence of noticing a slowdown of her Facebook postings. Like in all good stories, this has a happy ending, as he rescues Amy, and the bottom line of the story is that he exercised choice (friending many of his case subjects on his personal Facebook, rather than using agency tools), used external information (changes in Facebook posting behavior) rather than internal one, and focused on outcomes (saving Amy) rather than outputs (following visit scheduled on his agency’s case management system).

In fact the three realities were

I shared the stage with Mark McDonald who did a great job at opening the whole section of the analyst keynote and gave compelling examples of choice and outcome-orientation.

There were government examples throughout the keynote. I also made reference to examples in public safety and unemployment. Yvonne Genovese and Eric Knipp, who covered the new rules section, mentioned the US army citizen developer, the Department of Defense’s pattern-based initiatives to anticipate logistics problems and the GSA building renovation in Washington DC. Nick Jones, who shared the sage with Hung LeHong for the new opportunities section, mentioned futuristic but compelling health care example.

This was a really exciting start of the week and one-on-ones with clients afterward have been even more exciting. This year it looks like the largest US Symposium I have always seen as an analyst, and you can really feel the energy and the willingness of people to engage.

We are up for a great, although exhausting week.