Earlier today, the US federal government issued the long-awaited Open Government Directive, as requested in an executive memo issued in January by President Obama.

The directive covers the three principles of transparency, participation and collaboration set out in the executive memo, and outlines a series of actions that agencies must take over the next 120 days and going forward. Amongst them:

The suggested components of the Open Government Plan are skewed toward supporting transparency, for which a lot of detail is provided. However also the sections on to participation and collaboration confirm what I have called several times the “asymmetry of government 2.0”, i.e. the fact that governments take a one-way approach only to government 2.0 (data from government to citizens and engagement from citizens to government), losing sight that that information and engagement flow in the opposite direction too (information is created elsewhere that government need to be aware of, and government employees engage with external communities).

In fact when it comes to participation, the directive suggests that

The Plan should include descriptions of and links to appropriate websites where the public can engage in existing participatory processes of your agency […] The Plan should include proposals for new feedback mechanisms, including innovative tools and practices that create new and easier methods for public engagement.

While in the section on collaboration it says that

It is quite clear that the suggested approach is for agencies to address participation and collaboration on their turf and on their terms.

Also when external collaboration is mentioned:

[…] The Plan should include innovative methods, such as prizes and competitions, to obtain ideas from and to increase collaboration with those in the private sector, non-profit, and academic communities.

it refers to a type of codified, institutional collaboration that has little to do with the spontaneity of “general citizen” communities. (see interesting debate on citizen participation)

For sure, this directive will make social software vendors happy, as it will require agencies to consider some of their tools to support the requirement for participation and collaboration.  But, in doing so, the US government just perpetuates the asymmetry of government 2.0.

The picture below, which I used in a previous post, shows what I mean. 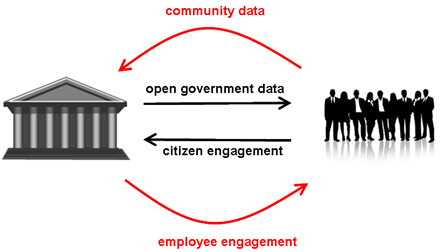 The US directive looks only at the flows drawn in black, but does very little to help agencies understand the importance of flows drawn in red for each and every principle set out in the executive memo. This begs a few questions:

Failing to address any of the above and setting so many milestones and reporting obligations for agencies, this directive risks turning into yet another exercise in compliance.

As a corollary to my disappointment, while I was following the live feed on Facebook with the Federal CIO and CTO presenting the directive and taking question, somebody posted the following: Too bad that agency policy prohibits us federal employees from watching this (or using Facebook) at work….