After attending the Gartner Symposium in Sydney, I have read a number of press articles that make reference to some of the topics I covered there.

An article on Computerworld captured my point about the need of a conscious loss of control to make government 2.0 initiatives successful.

Another article on GovernmentNews picked on the risks of open government. Quoting what I said in a press conference, the journalist wrote:

Governments should be more cautious about the data they place in the public domain […] governments had hurried to open up data sets with little regard to the outcomes and value that ‘mashed up’ products offered the public sector. […]

Who’s looking at whether these mashups are bringing value or not? Someone mashes them. It’s good from a public perspective but who will take action?” […]

Think about the consequences of the data they’re putting out there. The more data you publish the more risk you create […].

One could argue that these articles somewhat contradict each other, but actually they both are accurate reports (although with some added emphasis). As I wrote in an earlier post, government 2.0 is something that needs to be tackled, although it is fraught with risks. It is not that government organizations have a choice; the train has already left the station and, although different government domains in different jurisdictions will be affected at different times, this is something that pretty much any government organization  will have to come to terms with sooner or later.

Once more, the real issue is striking the right balance between different aspects of government 2.0 (something I have also mentioned in a previous post). In the picture below I have drawn in black the “traditional” information flows that are associated to government 2.0: data from government to people and engagement from people to government. I have drawn in red the reverse flows, i,.e. data that is created by communities and used by government, and government employees being engaged on externally sourced communities. 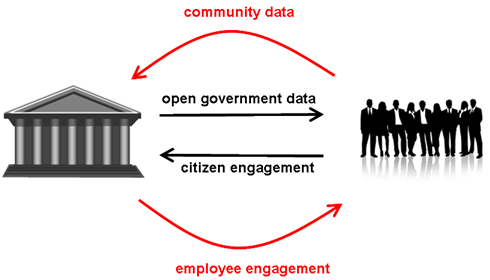 The black lines are those where government can exercise (some) degree of control. These include the various data.gov, all web 2.0 thrills and frills on government web sites as well as government pages on Facebook or accounts on Twitter.

The red lines are those where governments have to let go, have to empower their employees to act as connection agents with external communities. By its nature, this looks like the riskiest part, although – I would argue – is also the most important.

However, and that’s the point made in the second article, one should not think that publishing data is risk free. As I also said in my previous post, “if something goes wrong because data is not accurate or up-to-date or just because it gets mashed up the wrong way or even maliciously, government will be held accountable”.

I need to be clear on this. Open government data will do more good than bad, and the incidents that will occur on the way to transparency will be far outweighed by the value that this data create. This being said, it will take effort to make sure that data is used (see my point about the doubtful relevance of mashup contests) and that the occasional drawbacks of transparency are appreciated and properly managed.