It looks like government 2.0 enthusiasts feel compelled to give their own definitions of what government is. Yesterday I posted my views about why seeing “government as a platform”, as Tim O’Reilly does, may be slightly simplistic (and thanks to all those who posted their very valuable comments ).

Today it is Mark Drapeau’s turn. Incidentally, I find most of his tweets and notes very informative, and he’s a great resource for anybody researching on Web 2.0 in government.

In a recent article on Federal Computer Week, Mark suggests five ways to think about government 2.0:

This categorization has also been used in the Government 2.0 Expo to give awards to innovative web 2.0 initiatives in government.

While this is attractive as it recognizes the multiplicity of roles that government plays, I believe it is still slightly confusing, as it mixes mission (being a protector or a provider), implementation (being a process or a product) and role (partner).

So, while I support Mark’s attempt to relate the purpose, use and critical success factor of government 2.0 deployments to different aspects of government, I would suggest we go back to what Henry Mintzberg  defined in his seminal paper “Managing Government, Governing Management”, published on the Harvard Business Review in 1996 (yes, thirteen years ago and still very much relevant). A very smart Gartner client in DC handed me a reprint of that article, which he said he always found very helpful to understand how innovation can work in government (and this fully applies to web 2.0 and the likes).

Minzberg looks at four different relationships between government and its constituents:

Six years ago at Gartner, when looking at the problem of modeling public value of IT to help clients determine the business case for an IT investment, we came up with the following slide, that slightly expands Mintzberg’s concepts and looks at the nature of government roles. 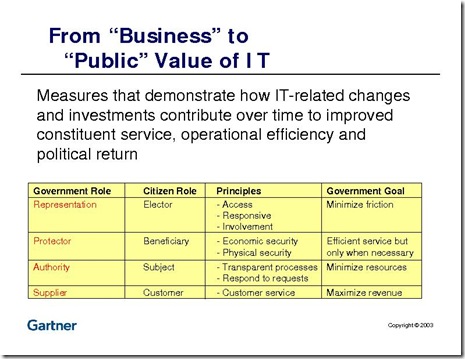 As you can see from the table, we also identified four main relationships between government and citizen, highlighting that the government goal and the principles behind each relationship are different. I find this view quite helpful to figure out where web 2.0 and social software can provide most value and in which domain.

I am using this for a presentation on “Government 2.0: It Is Not All Gold That Glitters” for the upcoming Gartner Fall Symposium in Orlando as well as for a research note I have in my pipeline where I am trying to strike the balance between conflicting views of government 2.0 (ranging from “everything is a platform” to “this web 2.0 hype is not for us”).

Last but not least, for those who may have read my previous post ( where I challenged O’Reilly’s “government as a platform”) as a conservative, quasi-luddite position, I would like to remember that at Gartner we have been talking about the blurring of government boundaries for quite some time. In May 2008 I addressed our European Spring Symposium government audience with a pitch on the Future of Government is No Government, which I then revised for our US audience at the US Fall Symposium in October 2008.

Since then I have seen the incredible change and acceleration in how government agencies – in particular in North America – look at government 2.0. But I am also seeing the risk that a combination of genuine enthusiasm, business opportunism, and “me-too” effect create the condition for a “dot.2” bust. That’s why it is so important to look at the foundations of what government is about and remind ourselves that technology alone cannot solve problems or create value. As an old boss of mine at the European Commission used to say: a fool with a tool is still a fool.