Among the external forces that impact technology and service providers, geopolitics is a newer kind of curveball. Of course, how countries and power blocs interact with each other has always been a factor in the tech sector. However, its role as a source of business risk has clearly heightened over the past couple of years.

You wouldn’t have to stretch your imagination to think of major companies that back in, say, 2015 would have still categorized their level of geopolitical risk as negligible or annoying, but that now file it strictly under significant — with even outright existential not being out of question or character for some players. What’s more, many of them have clearly been caught off guard by the scale and rapidness of this change.

Truth be told, it is not only the tech companies that are suddenly forced to do things differently. As an industry analyst, I personally did not use to give much of consideration to geopolitics when conducting research or advising clients, whereas nowadays situations where it would simply be imprudent to ignore such dynamics keep coming up. And when they do, they tend to push me well out of my comfort zone, causing a good deal of unplanned extra research and deliberation.

I believe there has been an element of naivety to all this unpreparedness, reflecting how techies have historically viewed their field as being somehow above and beyond politics. In that worldview, technology is something nobly rational and objective, driven by invention, innovation and fair competition – whereas politics is the murky old world of ideology, subjectivity and misguided regulations. Such perceptions may sometimes be more correct than they are incorrect, but if they lead a tech company’s leadership to disregard sizeable (geo)political risks in its strategic planning then there certainly is a problem. Blind spots harm vision.

With that in mind, we at Gartner featured geopolitics as a key theme in our brand-new Tech Provider 2025 series of research notes, which all explore from different angles how the technology industry will look like in a five years’ time. In particular, we looked at the intersection of tech and geopolitics across four distinct (if somewhat overlapping) domains:

The future direction of all these was then assessed under a scenario framework consisting of two dimensions per domain. A research note our team published in September (subscription required) provides our base case for each. In addition, we have made available also another research doc (subscription required) that walks through 16 different extreme scenarios, to identify and illustrate various low-probability, high-impact events associated with the four domains. If you are trying to get a better sense of how geopolitics stands to impact your business, those two resources should help you get started. Here is an overview of the approach we took: 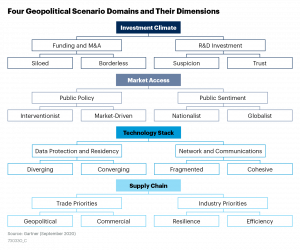 All told, our base cases currently expect that tech and service providers’ business environment will become notably less open and globalized than what it is currently. The implications span from unexpectedly blocked cross-border acquisitions to heavily subsidized national champions, or from expensively splintered product architectures to chronically reduced supplier choice.

While it is possible that some of the geopolitical pressures we have seen recently will prove temporary — ebbing and flowing based on domestic politics in key countries — it is likely that most will persist in the long term. In an increasingly technology-driven world it is no longer realistic to expect that technology, and technology markets, could somehow be decoupled from national interests and international relations.

The energy sector, deeply entangled in geopolitics since its early days, may offer a glimpse of what lies ahead in that regard. I doubt that tech will ever end up quite as deep in the stuff, but present day nonetheless feels in many ways like the end of an era — the Age of Innocence, of sorts. The next one may come with a rather different vibe. Better get used to it.

Making Sense of the Global Learning Crisis: How Bad Could It Get?

What Is Driving Today’s OKR Renaissance?

Give your organization a competitive advantage by exploring Gartner’s new...