Climate change, and actions to counter it, represent one of the decade’s biggest strategic megatrends, virtually in every industry vertical. The technology sector is no exception.

As Annette Zimmermann and I argue in our recent research note, Competing in the Age of Climate Change and Radical Decarbonization (subscription required), it is something that a growing number of product leaders at all organizational levels must start taking into account. Whereas climate and wider sustainability issues of the 2010s were still something of a “reputational overlay”, addressed within the parameters of the corporate strategy, their role in the 2020s is shaping up to be quite different. Rather than adapting to strategy, sustainability requirements will more and more define other elements of strategy.

In the graphic below, I have summarized the various pressures that make climate change and decarbonization such a strategic issue for technology and service providers. Alone, each of the categories might remain something fairly negotiable. Taken together, they start adding up to something more imperative. 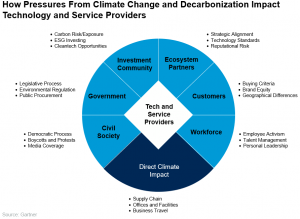 Of these, direct climate impact is pressing companies to derisk, while the other six others are driving them to decarbonize. Let’s set the direct domain aside and focus on those six other, less direct but in the near term arguably more impactful sources of strategic pressure.

Crucially, the level of concern and urgency that people attribute to climate change appears to vary by age – with younger age groups, on average, perceiving it as more important than older ones do. (On that, see e.g. findings from recent Pew Research Center, Eurobarometer or British Social Attitudes surveys.) A reasonable expectation, therefore, is that once the climate-focused cohorts gradually gain influence and resources as decision makers in all six areas, the strategic criticality of climate change will continue to increase as well. What is still seen as commercially appropriate in 2020, may be seen less so in 2025 — let alone 2030.

When we conducted our research for the aforementioned report, I could not help concluding that most tech and service providers that have started on the path toward net-zero emissions and carbon negativity are still approaching their ambitions at a pretty high and abstract level. (In the vendor briefings we conducted, those euphemistic “early days” were cited more than once.) However, as a direction of travel, such aspirations do seem genuine. In 2021 and 2022, we are then likely to see much more execution and implementation — and as part of them, also trade-offs and conflicting priorities that will inevitably follow. Many products and services will need to be redesigned, rearchitected and retargeted.

At the same time, this change will also create a plethora of opportunities:

Expectedly, technologies related to energy efficiency and energy storage are likely to see a wave of innovation. Virtual and immersive tools to substitute business travel and large physical events will be another area to follow. Analytics solutions to estimate, simulate and audit carbon emissions will be in high demand, especially if one considers how inconsistent, immature and, frankly, unreliable the data aspect of this space still is today. Meanwhile, for the leap from carbon neutrality to net-zero to become feasible, there is an awful lot riding on carbon removal and various forms of geoengineering. And finally, given the sheer scale of change that is facing industries across the board, it is safe to assume that we will also a thick layer of consulting and other professional services to enable organizations to develop and operationalize their decarbonization strategies.

Paradigm shift is a tired term in tech, but for describing the impact of climate change it feels rather apt. That’s also why we at Gartner covered it as part of our Tech Provider 2025 special report, which looks exactly the sort of Big Picture changes that stand to reshape technology and service providers the most over the next five years. To learn about another such change, check out my recent blog about the new geopolitics of tech.

Dealing with the Moral Hazard of Corporate Climate Risks

Want a Fairer Society? Get Rid of Your Socioeconomic Talent Filters

Find out how technology and service (TSP) product leaders can...

Explore the importance of having clear business objectives and marketing...